Here it is… the first of all our news from an incredible Panto prep day with our 2016/2017 Cast. But first.. “Let me take a selfie! Say Cheeeese!” (And there was an awfully lot of footage and selfies taken.. all will be revealed in the next few months.)

We recently embarked on our first cast photoshoot of the 2016/17 Pantomime Season which saw the entire cast visit all Four Theatre Venues and strut their stuff in the surrounding businesses and tourist attractions. The day consisted of 7 cast members, 2 photographers, 37 venues and one oversized bread bun courtesy of CK Foodstores. The day was long and tiring but spirits remained high thanks to the wonderful energy and positive attitude of this year’s Dick Whittington cast!

And so that’s a wrap on our first cast photoshoot for this year’s Dick Whittington Pantomime which is set to take South Wales by storm this Christmas and New Year. The day was filled with bright costumes, grinning cast members and one large, oversized show stealing bread bun called Popty! (who some of you may be familiar with if you shop with CK’s Supermarkets.)

Firstly I have to say that the day was an absolute success from start to finish, it couldn’t have gone any smoother. From the planning, to the photographers to the cast members themselves I can do nothing but commend and thank the team for their enthusiasm, support and patience on such a long and warm day! 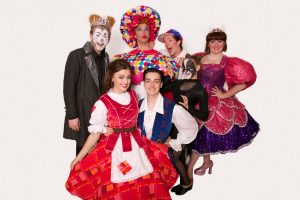 So now that the cat is out of the bag (Excuse the pun!) I can fill you in on everything that we got up to on the day.

We began the day in Carmarthen where we shot some character profiles and our first promotional images of the day at the beautiful Ivy Bush Hotel. I have to say a huge thank you to the staff for allowing us to cause some mischief, the team at The Ivy Bush were nothing but accommodating!

With our images for this year’s posters done we were ready to raid the Carmarthen Journal Offices to grab a quick snap with editor Lee MacGregor, then a quick stop off at the magnificent Lyric Theatre before heading up to Merlin’s Walk to paint the path’s gold! The sun was beaming and the atmosphere was fantastic but we had no time to bask in the weather, we had to get to Swansea City! 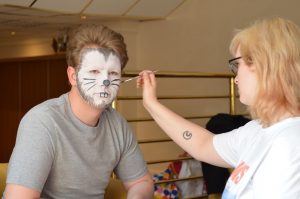 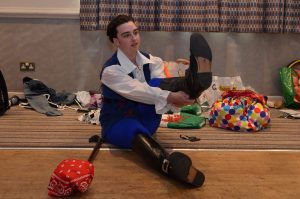 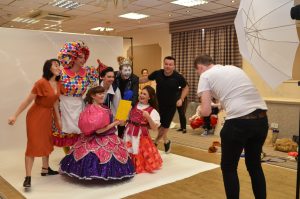 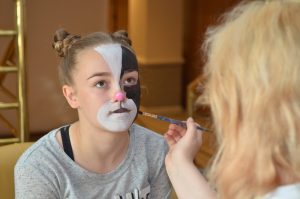 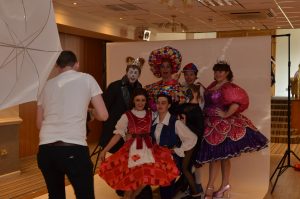 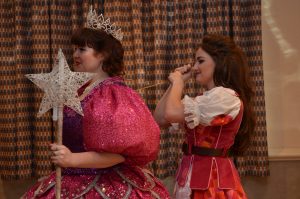 Next to our home town Swansea and we went straight to surprise the staff at The Evening Post Offices (I think it is fair to say that they didn’t know what had hit them!). A quick moment in the editors chair before dashing up the road to the newly refurbished Grand Hotel.. What beautiful rooms and we got to have the first sneak peak!! WOW! We called in to our old friend and team member Peter Lynn for a good old chit chat and also checked up on our new Citroen Bassett design for this year! Swansea City… Check!! 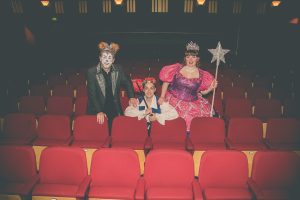 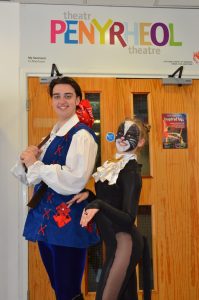 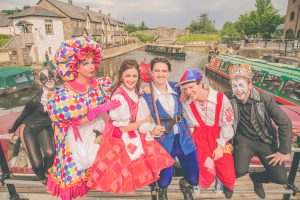 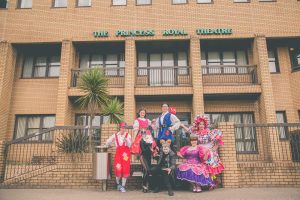 Next to Port Talbot and a quick run around Aberafon Shopping Centre.. If the cast weren’t tired when they arrived they certainly were when they left. With a bundle of community engagement and interaction the cast and locals had their first taste of how magical this Christmas is going to be. It is amazing to see how excited the children were when seeing the pantomime characters in real life, but also how confused the parents were that we were already gearing up for panto in JUNE! We must be mad! Finishing our time in Port Talbot we had the opportunity to meet with the team at Tata Steel Works who were a huge help in keeping our spirits high!

And finally to the wonderfully peaceful town of Brecon…The best way to end a busy day is a sit down with a Llanfaes Ice Cream. We took over the Guildhall, The Brecon and Radnor and even the Dragonfly Canal Boat.. Surely this can’t be work! A fantastic end to a wonderfully productive day!

Once again, a massive Thank You to the cast for their amazing energy on the day and also Well Done for smiling right to the end! We couldn’t have done it without you and are excited to work with you on this year’s Dick Whittington Pantomime.

It is fair to say that the day was a HUGE success which saw us upload over 1000 images!! Over the coming months you can see these images being filtered on to our Social Media pages and also by keeping up to date with all things Panto through our Behind the Scenes section!

Although we are already rushed off of our feet, we know that it will be incredibly rewarding when we begin to see the show come together in the end… Until then though it is heads down for us!!