On reflection of my recent time in Wales I’m currently: sat cross legged, balancing laptop case on one leg, handbag and work bag with my other leg and manoeuvring my forearm and wrists at Olympic gymnast precision to carefully not disturb the snoozing business woman next to me who has politely taken rest on my shoulder. My elbows are glued to my ribs as I tap fiercely on my mac, not wanting to cause any distraction or of course awake my new founded sleeping beauty. Its 9.22am. I’m on the Tube catching up on all things JP after a busy final weekend of Chitty Chitty Bang Bang in Cardiff… and saying farewell not only to Shaun Williamson who completed his run as the Baron in the show but also to the good ol’ faithful homeland of Wales.

It’s not even been 15 hours since driving over the Severn Bridge and I’m getting pangs of that feeling… “Oh Wales, I miss you!” I adore living in London and touring, but at heart I’ m a home bird. And the journey into Central London is a clear adjustment from the recent regular journey to work I’ve undergone during my past 3 weeks in Wales. The M4, my loyal road companion of years and years (Okay, yes, we have had some bust ups in the past, when a delay, or an unknown reduced speed limit have made me extra late for a meeting or an audition!) But the M4 and I have been mutually keeping each other company travelling back and forth from Swansea to Cardiff to Bristol to London since I was 7 years old and on this occasion, driving back and forth between the Office in Swansea and the Wales Millennium Centre has been surprisingly stress free… I have loved every moment of being in South Wales mixing work with pleasure and well more work this Summer!

Chitty arrived in Cardiff in her superb glory to a theatre that matched its grandeur and splendor. I’m completely biased of course, but the Wales Millennium Centre is THE best theatre in the UK, from the sheer size, design, and use of space, it is always an absolute joy to visit both on and off stage. It was also a highlight this time around as I got to appear as my cover of the Baroness for 2 shows whilst Claire Sweeney (who recently joined the Cast) appeared at a Concert. Understudying and going on for the first time is always a little nerve wracking but the Company, Cast, Crew and Band of Chitty were exceptionally supportive and the whole day was made extra special by being in Cardiff, the closest venue of the Tour to my hometown of Swansea, meaning I also got to perform to lots of family and friends! 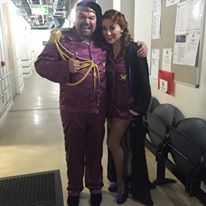 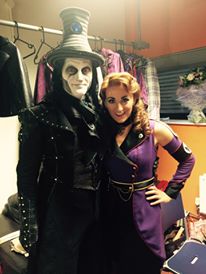 The second week of Chitty in Cardiff meant travelling more miles than ever as a daily commute to Brecon evolved. The week long 6.30 am starts were all worth it though as I doubled up my day with a brand new venture teaching at Theatr Brycheiniog’s first ever Musical Theatre Summer school. This is the first year that Jermin Productions is producing Pantomime in Brecon, and both Mark and I are hugely excited about this next step in our business. It is wonderful working with the staff at this inspirational venue and I was thrilled to be offered to take the first ever Musical Theatre workshops which ran throughout the week.

The students were an eclectic mix and all got stuck in with their week’s activities of learning songs, routines and scripts from the musical Chitty Chitty Bang Bang and visiting me at my “day job” with a tour of backstage and a ticket to the performance of Chitty. The course was completed with a brilliant end of week sharing of work, of which every student excelled at! Fingers crossed that we will see all the students return for our Juvenile Pantomime auditions in Brecon on 26th September too.

Next on the agenda for utilising my time of being so close to the JP Offices was working with Mark and the team in cementing our next drafts of the Pantomime scripts for both Dick Whittington (our touring Pantomime production which appears at 4 South Wales Venues this year and January next year) and the 2016 Aladdin Pantomime at Bluestone. Both productions are really exciting to work on, as each production is brand new and catered especially for our new audiences and venues. I’m so looking forward to the official launch of Dick Whittington and revealing our final design, as well as heading down to Bluestone in a few weeks time to kick off our Cast shoot!

Anyways its off to Canterbury next on tour, so will be in touch in the next few weeks, after choreographing audition routines, and finalising audio tracks for this year!