Oh that’s us! It is the cast of Dick Whittington here along with Popty, your favourite Pantomime bun who is ready to rise to the top this Christmas when he gets delivered to four theatre venues across South Wales. Before long he will knead a personal assistant because his diary is quickly filling up with appearances, Meet and Greets and also rehearsals for this year’s Dick Whittington Pantomime! 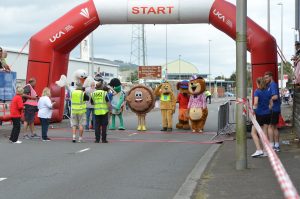 POPTY: “I guess it’s time to look back on the events of last weekend when myself and the cast of Dick Whittington got down and dirty at the Pendine Sands Ty Hafan Rainbow Run 2016. The day was jam packed with photo opportunities, running around and was also bursting with more colour and energy than I have ever seen before!!

This bun on the run was incredibly impressed by the amount of people getting active for such an amazing cause, although they did give us all including Popty a run for our money! There were some extremely determined runners and others who embraced the explosion of colour that met them at each corner! 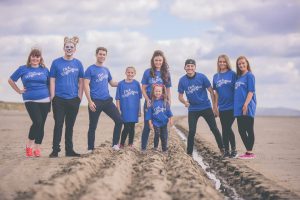 We arrived at the event very early and took a moment to appreciate the stillness of the beach scene before it was bombarded by a stampede of energetic and excited volunteers who were onboard to make the day a success.. which it most definitely was! There were hundreds of people representing every age, walk of life, and level of seriousness. We were all blown away by the creativity people showed in their outfits and costumes, we even thought of borrowing a few for our Dame Cookie!!

Thanks to Shelley Kirkham Popty and the Dick Whittington gang were in charge of the red paint station (We can’t believe they trusted us either). With this bun in charge there was no doubt that our station would be the loudest, craziest and most colourful of them all, and that it was! A cloud of red, orange and pink powder paint filled the air as we cheered on hundreds of runners who were embracing the mess and madness of the day! The energy in the air was fantastic and there was no confusion as to why this is one of South Wales’ most popular and most colourful 5K race! 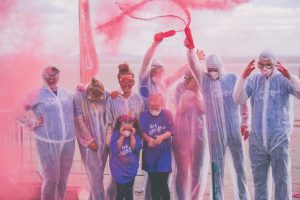 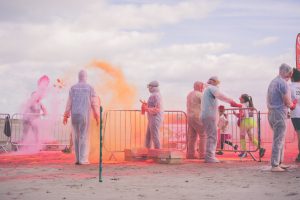 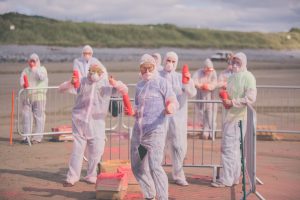 Every kilometre of the run there were explosions of colour which made the day so enjoyable (and a photographers dream). The event came to an end as we welcomed in our final runners who was only nine years old, it was amazing to cheer these racers around the entire track. With a blast of the remaining powder paint and a burst of applause, our race and event was finally over!

POPTY: “I had the best time racing across the beach with my Pantomime friends, I couldn’t have asked for a better way to spend my Saturday! We had LOTS of photos taken and even had a few Ty Hafan photographers chasing this bun for a photograph… I loved every second of being the 5K celebrity for the day, That was until my trousers fell down in front of the entire team! At least it made them laugh!!” 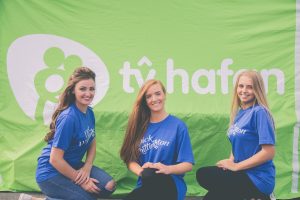 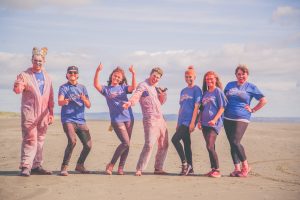 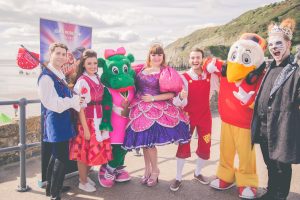 The event was a HUGE success thanks to the Ty Hafan team and also Shelley Kirkham who worked so hard to make the day run smoothly! Leaving with smiles on our faces and every colour of the rainbow on our Dick Whittington T Shirts it was time to catch up on some beauty sleep ready for the next promotional adventure!