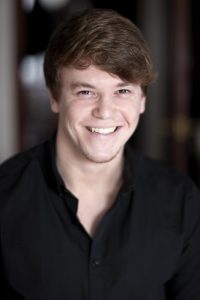 So its my 4th year on a Jermin Productions pantomime and it just gets better! For the last 3 pantomimes I have played a Dame and enjoyed every second of it,This year, I’ve hung up the high heels and put a lid on the lipstick and I’m putting on the big, baddie boots along with an evil black beard!

That’s right.. I am your ABANAZAR in this years ALADDIN at Bluestone National Park Resort in West Wales!

Wow, after meeting my new fellow cast members last weekend at our first rehearsal, I was Impressed and blown away by the talent in the room. For a small cast of 7 , the atmosphere was that of a full ensemble in the west end!

It was a non stop 3 days of singing, acting, dancing and perfecting our performances and chemistry as a cast. To be honest, the chemistry was there from the moment we all walked in the room.

We have a diverse range of ages, abilities and performance backgrounds in this cast so we all had something to bring to the table.

By the end of day 3 rehearsal, we had a full running show that was going smoothly and all of Mark’s feedback was praising us for what we had accomplished. 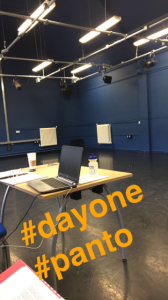 I’m not going to lie to you all, I was very nervous  as this year I will be taking on the role of Swing and Dance Captain. This is the first time I have not only learnt a show in three days but had to learn and perfect four other characters – Aladdin, Wishee Washee, Widow Twankey & Abanzaar along with my onstage track, where I feature as different cameo parts…  EEK!!My script is full of colour. To make it easier for myself I have given each character a different colour so I know what character moves where, says what, and exits. To be honest I’m still getting my head around it all now.

The show is absolutely hilarious, the JP writing team have done such an amazing job to not only add current comedic lines but have changed well known songs with lyrics that connect to the piece. Bluestone audience you are really in for a treat.

After 3 long days and barrels of coffee we started running the show and we were all surprised at how smoothly it went, We also learnt the routine for the finale which is full of energy and requires everyone to be on the ball! Everyone is having an absolute blast, which is what pantomime is about having fun and a good ole giggle. If we are enjoying the audience will too!

Having pantomime rehearsals this early on in the year has made me feel rather Christmassy, so on the final day of rehearsals, I was a bit cheeky and opened up the box of celebrations (which my mum has been hiding from me for Christmas Day- not very well HEHEHE) and put the film Home Alone on as its my ultimate Christmas movie. And now I’m definitely feeling the Christmas spirit already and it’s only OCTOBER! Whoopsy.

I can’t wait for it all to begin and we start performing in costumes and make up, (wish me luck with that!)

For now its back to the script I go! Hopefully We’ll see you there at Bluestone. Be prepared for a magical and spellbinding ride.

This week I started rehearsals for Jermin Productions’ Bluestone Panto Aladdin as the gloriously gutsy, grouchy, gargantuan and grim Widow Twankey. The role having me ditch the Chelsea boots for stilettos and leave behind life at home.

In my day to day to life I am a performing arts teacher and musical director, specialising in voice and technique running choirs and training young voices as well as directing youth theatre. I also am a retro singer rocking and rolling the 40’s, 50’s and 60’s decades. But my passion is for performing, and blimey, have I come back to it in full force.

I should mention that I am a southerner and leaving behind my slow seaside town and jobs has meant buses. Lots and lots of buses. And much like the infamous Mrs Twankey I am a lover of the finer things in life… Even if we can’t necessarily afford them… Anyone got a magic lamp handy?!

And from there we kick started the day and already was in my element and couldn’t wait to strap myself into the heels.

Dame-ing up has a been a life time hobby of mine (now my job) all starting at the age of 3 where the alter-ego Doctor Sarah was born. A family friend (now flat mate) would spend many an hour trying, in any way possible to get her brothers, or me and my brother to let her doll us up… Whether it be through bribery, persuasion or blackmail… Then I come along and love it! Despite my mothers initial and once again, persuasion, bribery and blackmail to get us to STOP… We both carried on and it’s stuck with me to this day where I’m doing it professionally and bless her, she loves it more than the rest of us put together!

So as I sit nursing a nice Shiraz and trying to master full frontal Nia Jermin choreography in my front room I flit between writing this blog and trying to extinguish my growing worry that with my growing laundry pile, overflowing make up bag and my ever tireless and fruitless endeavour to find a man that I’m actually turning into the Widow herself… I bring My blog to a close.

It is only apt to finish this in true panto style

So I finish this entry in perfect rhyme

And pray that it has made you smile.

If not it really would be a heinous crime

As this thing took more than a long while!

So you want to know about my experience and how I found my time?

Well it would seem that all I’ve really done is strut in my heels mile after mile.

Into JP Prodictions we will continue exploring

Working with Mark is fun and inspiring

But don’t be fooled it is damn tiring

I have felt amazing to be back in the performers saddle

And I’m sure Bluestone’s minds will addle:

Our production is slick, stylish sexy and funny

With fabulous performances and direction

Seeing Aladdin is certainly the best way to get an enormous….. Amount of Affection!

If not, do be kind, as I’ll let you into a small secret… It’s my first ever one! 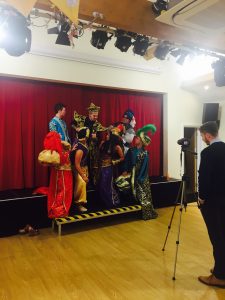