Zach LeCheminant is preparing to make the big move to Bluestone Resort where he will be transforming into the flamboyant Widow Twankey this Christmas and New Year! Before Aladdin arrives on the scene Zach stepped out as a brand new Halloween character for this year’s Spooks in Swansea City Event!

I’m at it again – it feels like I’ve spent most of my year in drag already and Saturday was no different! Instead of strutting my stuff as the uncouth, dim witted washerwoman Widow Twankey I took to the streets of Swansea in a different guise. Allow me to introduce you to my latest creation: Miss Agatha Cackle, a food tech teacher (or home economics for those of you with a few too many candles on your birthday cake). My Cackle is a very posh and bubbly woman with a very saucy side and she’s always on the hunt for her next dish! I like to think that Cackle is closer to my own personality- well educated a fabulous cook and a wicked personality… Though I’m sure most would tell me I was closer to Twankey- an overdressed clumsy mess! I Dressed in navy with splashes of red and white in the form of a belt giving me a fabulous waist (just a shame it’s got it’s own postcode) and complete with KILLER black heels.

The day itself was a brilliant success and came together beautifully with loads of amazing acts with shocking talent! Where I come from town events usually involve a terrible frank Sinatra impersonator, the local amdram society doing a medley from their upcoming production of Brigadoon and a visit from the mayor. Spooks in the city was the total opposite of the disaster I’ve just described. A personal favourite thing of mine was the wave radio site where I (Miss Cackle) presented the acts and performed my own spot. But more on that later. Along side me was radio DJ Claire Scott who was extremely lovely and knew how to pull in a crowd. We had a good laugh together especially during my Cackle spot! 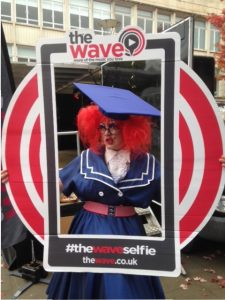 During the event, as the cookery mistress, I wrote a sketch describing my antics with various ex husbands and culinary disasters all resulting in a bush tucker trial eating challenge. The volunteers (victims) each had to spin a wheel (à la Wheel of Fortune) and had to eat a range of things from crickets, maggots and for the lucky few: jelly beans. This drew a lot of attention from children rather than adults as originally planned! This on the whole was hilarious… One child had to eat a cricket (that tasted has grim as they looked I’m sure) and the girl of around four threw it straight in and ate it. When asked what it tasted like, she responded ‘sweets’… I dread to think what awful things her parents are fobbing off as sweets… Perhaps this ought to be investigated?! 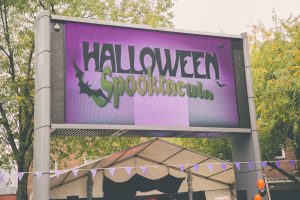 After the Wave stage packed up for the day I had the wonderful opportunity of introducing some young talent on the Main Stage which was based in Castle Gardens. Some of the best of them were girls around thirteen and fourteen which was amazing to witness. When I was fourteen I was awkward, chubby, sporting a dreadful square haircut (perfect Frankenstein Barnett for Halloween) and wearing novelty t shirts. But these young performers looked fabulous and were singing better than most of the Xfactor cast put together! 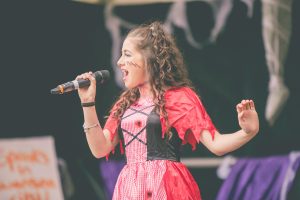 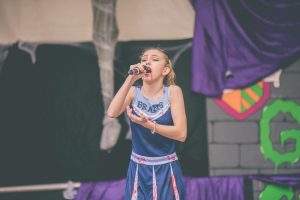 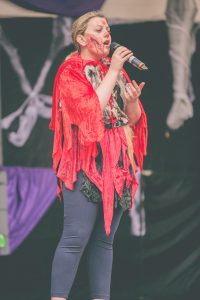 This was another wonderful Jermin Productions event led by Lucesca who is a seriously amazing young woman and will be one to watch in events planning- she is switched on, organised and gets things done and gets what she wants… Is there room for another Mark Jermin in Wales?!

Safe to say I had A spooktacular day and can’t wait to see how the event grows in following years.