Kev Johns: Swansea’s top comedian, presenter and occasional pantomime dame steps into a brand new role through his latest project in partnership with Arriva Trains Wales. We take a look Behind the Scenes to hear how this Swansea icon went unnoticed in his new disguise…

One of the great things about working as an actor and performer is the variety of roles you are asked to perform and different projects that you are part of and that can sometimes all happen in a single day. In the past I’ve rushed from playing Bottom in Shakespeare in a matinee performance to become Dame Trot for a Panto Press Launch of Jack and the Beanstalk.

Recently, I took a call from the office of my agent at Mark Jermin Management about a very different and intriguing role!

Arriva Trains Wales were planning three staff conference in Cardiff and Chester and they wanted something different, unusual and funny to start off the morning, Something like the Monty Python ‘Romans’ sketch, they said! You know the one ‘What have the Romans ever done for us?’. Oh and the majority of staff at the Conference would have to believe that the actors involved were all Arriva staff.

There would be four actors, Mark Jermin would write and direct, although much would be devised in the rehearsal period. What fun that was and what fun it has been. In the end my character became Dai David McWinge, chairman of the Arriva Wales Cynics Society (like my father before me, his father before him and his father before him), who was similar to the character played by John Cleese in that iconic Python sketch, ‘what have they ever done for us?’. By the end of that first rehearsal we were performing our routine to the team from Arriva Trains Wales and soon wardrobes were issuing the costumes, in other words Arriva Trains Wales uniforms.

The performance days have been fantastic due in part to the fact that the delegates had no idea that we weren’t Arriva Trains Staff (although I did have a couple of ‘what are you doing here comments). There have been occasion where actors have been asked what station they work out of and have had senior managers introduce themselves. It’s been great fun with our final performance in Chester later this week and proof that theatre, performance and comedy can play a major role outside of its usual stages.

For me the reward came after the performance when a number of those attending said that they have known man ‘Dai David Macwinges’ over the years. I’ll let you into a little character development secret – so have I!

As an actor, fooling people into believing that you are something you are not is part of your job, but that was sure to be pushed to the limit with my most recent job.

‘Dai David McWinge’ (played by the hilarious Kevin Johns) would be asking the room full of Arriva management, what the company had ever done for them, but the answers would come from the actors, who were secretly scattered around the room. Dressed in Arriva Trains Wales official uniforms, it was hard to spot us in the crowed – we even had the Director of Customer services fooled! 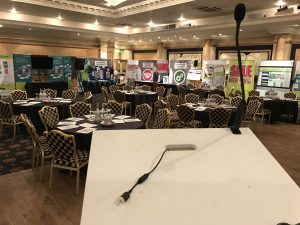 At our first conference in Cardiff, there was time before the conference to mingle with our ‘colleagues’. Over croissants and coffee, management were discussing their strategic goals for the next 12 months, while we convinced them we were trainees looking forward to learning more about a great Welsh company. Once sat at our tables, Dai David McWinge started the conference off in style. The look on the faces of the people sat on our tables when we began responding to the questions asked by Dai was fantastic. They had no idea what was going on, and were shocked by the performance. It took a moment for them to realise that I wasn’t Laura Harris, a trainee conductor from Llandudno Junction as I had introduced myself as, but actually an actor sent to fool them.

It was a fun way to start their day, and a great ice breaker to encourage them to talk openly about how they feel about their company. After the success of the first conference, we knew we had a captive audience, and were excited for the following two conferences in Cardiff and Chester.

I’m glad to say that all 3 conferences were a success, we managed to to trick everyone, including Arriva Trains Wales Managing Director Ian Bullock. Its true to say that there’s never a dull day being an actor!