Are you brave enough to survive the Jermin Vermin Vault? Brother and Sister duo Mark and Nia Jermin took their Dick Whittington Cast down under to experience their own version of Aussie lifestyle!

As the Panto season draws closer, so does the launch of this year’s I’m a Celebrity Get Me Out Of Here! With a number of tv personalities and spots stars revealed to be going down under this year it seems that everyone is feeling the jungle vibe this week. Theatrical company Jermin Productions have been in on the Australian action this week by thinking outside the box (or should be say inside the box) for ways in which South Wales can create their very own version of the ITV reality series.

It’s behind you! That’s right! The Dick Whittington Cast have had their ‘Wits’ about them this week as they have undergone a number of bush tucker trials and challenges, one being the fear of coming paw to paw with the Pantomime’s biggest stars… RATS! Yes these rodents have riddled the Pantomime Cast with fear and can also be thanked for creating some spectacular reactions from the Pantomime Cast.

Their latest publicity stint cleverly combines King Rat and his plague of BROdents with the infamous Bush Tucker Trial giving us: The Jermin Vermin Vault.

The video shows King Rat taking on the Ant or Dec persona and loading a coffin with the stars of the pantomime: Dick Whittington, Alice Fitzwarren, Dame Cookie and more. They then take part in an endurance test where rats are placed on them and the star that lasts the longest: wins. Search www.facebook.com/jerminproductions to see their hilarious reactions and meet the loveable characters featured in Dick Whittington!

Producer and Director, Mark Jermin, said: “This was an opportunity not to be missed. With the main theme of the Panto being the rats of London and the I’m a Celeb hype already building we thought we should combine the two. What gets more Christmassy than I’m a Celeb and Panto put together?”

“I couldn’t do it so I have to give the cast a tremendous amount of credit for facing up to the challenge!”

“It was such a hilarious shoot, I couldn’t resist sending some sound bites and video clips to Charlie to show her”

Charlie Brooks, a good friend of Mark’s, best known for her portrayal of Janine Butcher in Eastenders was crowned Queen of the Celebrity Jungle in 2012 and was said to approved the video before it was revealed.

For the next 7 days Jermin Productions will be revealing sneak previews and behind the scenes clips of some hilarious reactions. If you think you can help rid London town of RATS then join us this Christmas and New Year at four theatres across South Wales! 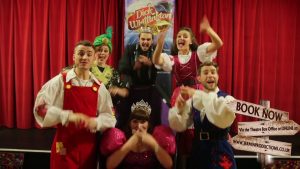 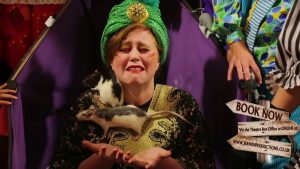 The Dick Whittington Pantomime will arrive at the following theatres this Christmas and New Year: