Marc Skone is known as a local actor in the South Wales area and has been known for various roles on stage and screen, and is no stranger to treading the Pantomime boards (and wearing a false eyelash or two!) This year Marc takes on the role of Dame Cookie in ‘Dick Whittington’ and is thrilled to be back in the make-up and also adding a brand new theatre venue to his CV.

Mark is a local actor who has enjoyed a very colourful career in the acting industry most memorably playing bad boy character Rhodri Lewis in Welsh Soap Opera ‘Pobol Y Cwm’, who was suspected to have drowned in the big Cwm Deri flood. From his featured appearance on this award winning welsh soap this rising actor gained much interest from local radio stations and a number of welsh theatre projects. Marc also became no stranger to the stage and gained the life changing opportunity of appearing in the West End of London in ‘Joseph and his Amazing Technicolour Dream Coat’.

Here we caught up with him to see how he is getting on with his high heels and first day of rehearsals! 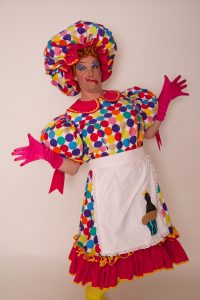 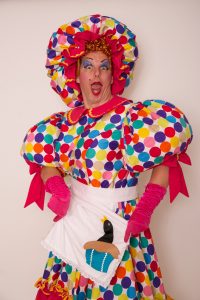 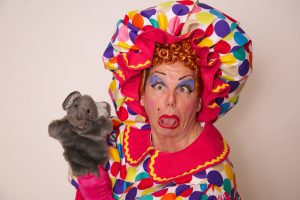 “As Christmas starts to buzz around the streets of South Wales and with all things festive well and truly on our minds it’s most definitely time for the Pantomime to arrive in town. Rehearsals are now in full swing for myself and the Cast, with the latest full scale, Jermin Productions Pantomime  scheduled to take the stages of South Wales by storm this Christmas and New Year.

I’m so excited to be involved in this year’s production of Dick Whittington that will tour around South Wales. I have taken part in Jermin Productions’ pantomime since their conception in 2014 playing Prince Charming in ‘Cinderella’ and in the following year he hung up the suit in favour of the stilettos to play Nurse Nellie from Kidwelly in ‘Sleeping Beauty’.

I said last year that you wouldn’t be able to keep me away and I was right because I’m back with a bigger character, bigger bust and even bigger heels”

I am thrilled to be visiting all 4 Venues, playing in my home town of Carmarthen is always pretty special and its going to be great visiting, Theatr Brycheiniog this Christmas and New Year. I used to always spend my Christmas in Brecon with my family. It is the perfect scene for the festive period and I am delighted to be performing to the Brecon audience

Pantomime is always really exciting and larger than life! My other biggest Theatre roles was being part of the musical Joseph and his Amazing Technicolour Dream Coat, which was a phenomenal experience and it reminded me that live theatre was my biggest love.

I love how unpredictable it can be and how physically demanding it can be during rehearsals, after appearing in Joseph I knew that I wanted to continue working in theatre and promoting this in my local area.

I returned to South Wales Marc Skone  and began working with that dynamic brother and sister duo Mark and Nia Jermin and since their humble beginnings of the company, it was been great to see each production grow every year and developed into this year’s full scale, touring pantomime.

I began working with the JP team to exercise my love and passion for live theatre but also enjoyed lending a hand with the script. Myself, Mark and Nia would have coffee mornings where we would brainstorm puns, gags and classic panto jokes and add witty local references for each theatre venue. Since then i’ve also been involved in this year’s Halloween celebrations in Swansea City Centre: SPOOKS IN THE CITY 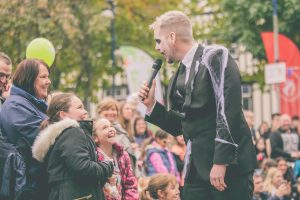 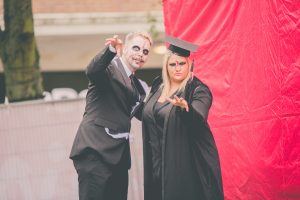 The Cast and I have also been extremely busy promoting Dick Whittington to local students and youth groups across South Wales through hosting educational workshops and reading sessions in both welsh and english. Having vast experiencing in teaching and lecturing, and as I am  no stranger to the school environment, I would like to say I know to keep an open mind when hosting the workshops.

People say never to work with children or animals and I have found out why! Children are so unpredictable which is why myself and the cast need to be ready for anything when working with the schools.

I must admit that visiting the schools is my favourite activity during the pantomime season, it is fantastic to work with enthusiastic audiences and children who love pantomime and theatre as much as we do!

It is also rewarding to teach the workshops through the welsh language and encourage the children to use welsh words and phrases in their daily lives.”