Well here we are heading into week three of panto at Bluestone… Or is it two or four?! Who knows, if there’s one thing I’m sure of its that most of the time I don’t even know my own name let alone what day of the week it is: our schedule is FULL ON! So I sit here on my day off, a Friday, and take some time to tell all about the many antics of the last few weeks and our first 8 show weekend!

The experience so far has certainly been involved with plenty of laughter, plenty of wine and plenty of drama (we are thespians afterall). But first I’ll tell you about my experience as Widow Twankey as that in itself has been ‘varied’. 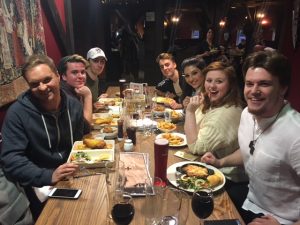 One of the biggest things I’ve had to get to grips with is the fact that I’m the foreigner of the cast having travelled to Pembrokeshire from the far and distant land of ‘Brighton’. So I’d like you to picture me in all my dame glory having to navigate dresses that have a four foot circumference, eye lashes that if you look down for a second too long will probably bring you crashing down to the floor and high heels- which I manage beautiful as two girls pointed out to me last night. They were filled with shock and admiration that I could dance and do everything I do in the killer heels I have chosen to wear. This has been one of my favourite compliments so far as I feel a great sense of achievement in the fact I can perform better in heels than they can-  apparently. 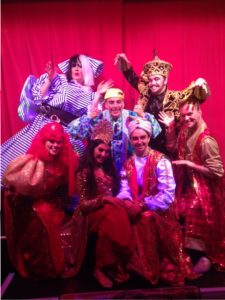 But back to the foreigner in Wales! During my opening speech everything was going very nicely indeed with audience laughter being exactly as it should be and me at a thundering pace that comes to an abrupt halt when I ask my male victim I the audience their name… ‘Carwyn’… Now I’m not even sure if that’s how you spell the name as the only education I’ve had in Welsh is in the road signs. So I’m sure you can imagine the panic that came over me when presented with this name. ‘What?!’, ‘Eh?!’, ‘You got an easier one than that love?!’… This conversation went on for quite a while until we had to compromise with calling him ‘Webb’… Probably his surname. Luckily the audience found this all to be very funny but I dread to think what sort of name I’ve given the English in the process- ‘bloody idiot’ springs to mind.

As I mentioned before I have to negotiate an enormous dress throughout the show and one of these dresses is designed to resemble the Taj Mahal when Aladdin finds his fortune and holds his big party/palace warming. I come on stage to the song ‘We Built This City’ and because of said enormous dress, when I came on… Let’s just say that THIS city fell harder than Saigon, The Berlin Wall and Rome put together! The dress in question hooked itself onto a bolt holding the stage together and as I went up the steps onto the stage I was pulled to the floor and was met was uproarious laughter from the audience and I have to admit I did corpse a little bit as it was extremely funny! 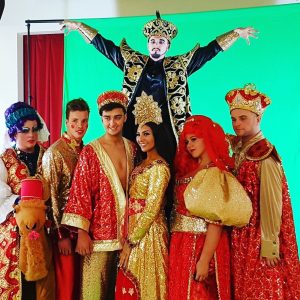 All in all the weekend has been a lot of fun and very high energy but most of all rewarding. Personal Victories of mine include: managing to have clear skin despite the amount of slap on my face, not breaking anything falling onto stage and most importantly it has meant I’ve lost weight; I’m currently wearing a rather lovely blazer that hasn’t fit me in months. Happy Twankey indeed!