Thats Showbiz, The Show Must go on, Bring in the understudy! Actress Laura Harris discusses what it’s like to fill the shoes of a Bluestone Pantomime Princess and also the spontaneous and unpredictable world of show business!

Being an understudy, you are always expected to learn the lines, harmonies and track of a leading lady, but may never be needed. You wait in the wings marking the routines, humming along to that solo waiting for the director to call on you. For me, the nerve-racking call came this week for Bluestone’s Aladdin Pantomime.

The cast of Aladdin have been wowing audiences in the idillic South Wales resort since 1st November, with even ex Wales Rugby captain Ryan Jones getting in on the action. The Pantomime welcomes all guests and audience members to meet the cast and also have a selfie which they can tweet with the hashtag ‘#BluestonePanto‘ – I know, how times have changed! Ryan even tweeted two images of the cast, it’s great to see audience members getting involved! 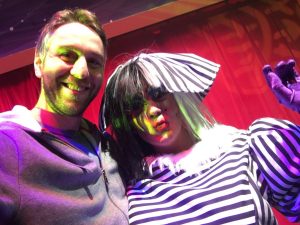 I had been to several rehearsals with the cast, had my script all marked up, and lines learned just in case I was needed. Late evening, I received a call from Mark Jermin to say that it was my time to step up and become Princess Jasmine – my first ever princess role, how exciting!

I headed straight down to Narberth that evening, where I met up with the cast to run lines and dance numbers. The Aladdin cast had already performed over 40 shows, but I kept them up until midnight to make sure I was ready to step on stage the following morning – thankfully they were more than happy to help!

The morning came, and the Aladdin cast and I headed into Bluestone for one final run through on stage. The village hall at Bluestone is fully kitted out with amazing theatre lighting, which does mean you have many marks to hit, and not one cue can be missed – the pressure was on! Aladdin (played by the lovely Sam Jennings) and I had sung through our beautiful duet ‘That’s how you know‘ from Enchanted for the last time, when the front of house staff told us we had two sold out shows ahead of us! SOLD OUT – Bring it on. 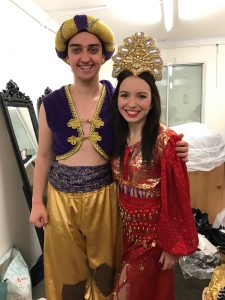 Waiting for my first entrance, Abanaza (played by the hilarious Liam Dascombe) was whipping the crowd into a frenzy, getting the kids screaming and cheering, I didn’t want to let them down. Thankfully, as the lighting changed, the music twinkled, and I entered the stage, all my nerves disappeared, as I could see so many happy children waiting to meet their Aladdin and Jasmine. From that moment I was able to relax and enjoy the performance. Being able to enjoy myself meant I wasn’t worried about remembering my next line, but I was able to enjoy the treat of performing with such a talented and funny cast.

The first show went without a hitch, and the audience raised the roof at the end, our work was done…for 20 minutes. Aladdin is so popular in Bluestone that they have up to 4 shows a day, so it was a quick turn around to get ready for our next full house.

Following the success of the first show, the second show seemed to fly by, a whole new world proving to be a beautiful magical moment with children pointing and waving.

After each show, the cast have photos with the audience members so they can remember their time at #BluestonePanto. During one performance, I met 5 mini Jasmines – and as you can tell by the photo, I’m not sure who was more pleased to meet who! 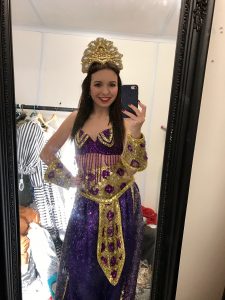 As an understudy, you are lucky enough to learn the ropes of such varied parts, but are never sure when you will be needed. I had a fantastic day playing Jasmine, and look forward to the next challenge, who knows what it will be!