It’s 2017 and our Dick Whittington Pantomime Cast are gearing up for their final opening night at their 4th theatre venue, The Princess Royal Theatre, Port Talbot. During their final leg of the tour the cast will be checking in, and kicking back at the luxury Grand Hotel Swansea.

So it is 2017 already… Wow! The past 12 months have flown by and we’re almost at the end of our 2016/17 tour (BOO!) We have entered the month of new years resolutions, gym membership renewals and back to work blues but this January we are determined to keep the spirit of Christmas alive in Port Talbot. As the cast rest up and the costumes have a little spruce up, we in the process of moving our full scale, Pantomime production of Dick Whittington into it’s brand new home, the magnificent Princess Royal Theatre Port Talbot. The Pantomime has seen Dick and his feline friend Tom Tom stop off at three theatres so far including The Lyric Theatre Carmarthen, Penyrheol Theatre Swansea and Theatr Brycheiniog Brecon and spread their festive magic to all local audiences. 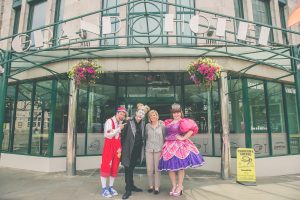 With Tom Tom the navigating cat leading the way the cast are looking forward to a much needed ‘Cat Nap’ at the luxurious Swansea Grand Hotel. The cast will be checking in to the City Centre Hotel prior to their opening night on Thursday 12th January at the Port Talbot Theatre. As proud supporters of this year’s Pantomime, the Swansea Grand Hotel Staff are sure to make the cast feel at home as they embark on their final performances of this fun-filled Pantomime season. The cast were also welcomed to the extravagant accommodation over the Christmas period where the cast were performing at Gorseinon’s Penyrheol Theatre right up until Christmas Eve. 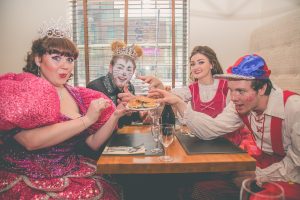 “During this year’s tour the cast have spent a lot of time on the road, away from home and living out of a suitcase so we wanted to try and make their Christmas as festive as possible. It was safe to say that each cast member felt like they were home when staying at the Grand Hotel. The welcome and treatment that each and every person got was outstanding and it definitely made being away from home at Christmas much more enjoyable and festive. We are definitely looking forward to returning to their wonderful accommodation during our last leg of the tour, what better way to thank our cast for their wonderful work this Pantomime season!” – Mark Jermin 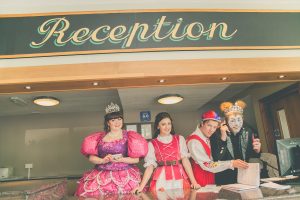 With our final opening night just around the corner the cast are ready to adjust to their brand new venue ready to take Port Talbot by storm. The production has received rave reviews in all three venues so far so the cast have very high expectations to meet at this brand new venue! On behalf of ourselves and The Princess Royal Theatre, we welcome you to this years spectacular Dick Whittington Pantomime which will continue to astound audiences until their final performance on 22nd January 2017.