The gavels are down, the evidence has been collected and the audience of judges are eagerly awaiting the verdict… The Panto Jury have confirmed: Dick Whittington is GUILTY of being a TREMENDOUS PRODUCTION!

(We as a team are thrilled of course!) It is always so unnerving awaiting for audience feedback; be it your friends from work coming to watch, the cast parents watching the first show, a newspaper review, a Pantomime blog? And each can make you feel excited and scared of their thoughts! It goes hand in hand of being a performer of course, the constant judgement, the notes, the clean up calls, “Try something differently” / “Can you say the line like that?” / “Your diction isn’t clear” “/ You need to let that joke land”  from the teams of directors, writers, choreographers (and Mark and I can certainly give our fair share of notes!) but getting a public review can sometimes be the most scary, especially for such a small and young (ish!) company in this realm of British and experienced Pantomime productions that run all over Wales and the UK: And once that review is published… it is out for the world to see! 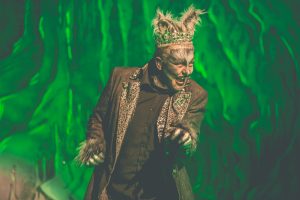 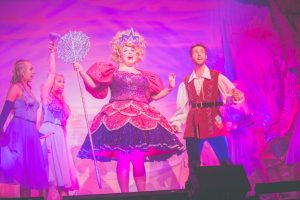 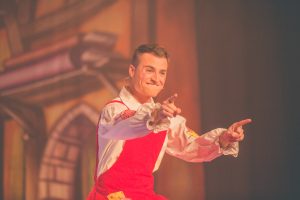 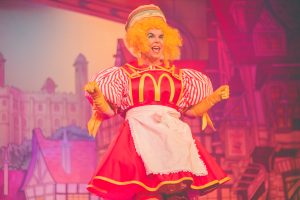 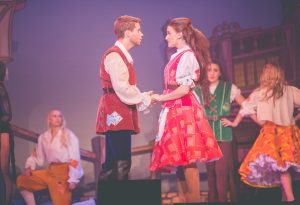 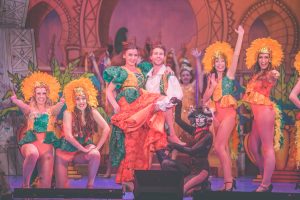 So you can imagine our delight on seeing the online audience feedback which includes comments such as:

“It looked so beautiful, such a lovely set and costumes”

“The funniest panto ever! And great for adults and kids!”

“The Cast were outstanding…great laugh to kick off 2017”

We particularly like this descriptive piece, superbly written by Tim Butters from the Abergavenny Chronicle.

“Pure unbridled Panto carnage: The lights were dimmed, the claustrophobia set in, and a mild panic sharpened the senses, as the drums pounded in the pit, the guitars chimed, the synthesizers soared, the velvet curtain was drawn aside and we entered another world.

And here’s the thing. Within ten minutes, something strange happened. I began to enjoy something I thought I’d be forced to endure: it may be that the show was a timely reminder that when done right, Panto can be a lot of fun.
And Mark and Nia Jermin, the brother and sister behind Jermin Productions have got a canny knack of doing it right.
From the first puff of smoke and boisterous bang which heralded the arrival of chirpy cockney sparrow Fairy Bowbells (Laura Phillips) to the last mass sing-a-long, this version of Dick Whittington is as crazy as a barrel of rattlesnakes at full moon, but with a better sense of humor.
The songs were sung, the slapstick slapped, the wordplay wordy, and the story unfolded, but it was the individual performances which livened up the tale of the simple country lad from Brecon who made his fame and fortune in the big smoke.
Miles Braithwaite as Dick Whittington played it straight as the everyman hero with the big heart and big dream, and combined well with his leading lady Alice Fitzwarren (Lucesca Walters) to turn on the charm, the song and keep the punters engaged.
In King Rat (Billy McCleary), Jobless Jack (Adam Byard), TomTom the Cat (Robyn McDonald), and of course, the all-singing and all-conquering Dame Cookie (Marc Skone), you’ve got a gang of misfits who hit the bullseye every time

All in all, How much more bang do you want for your buck?”

The Full article can be read here:

And we’ve even had a host of fellow Pantomime celebrities attend our production.

Here is what Ruth Madoc, AKA Gladys Pugh from Hi-de-Hi had to say about this year’s Dick Whittington:

And so its on with the show for the Final Countdown… Just 1 more week left of performances at Princess Royal Theatre Port Talbot, including a week of school shows, public performances and our exciting GALA night on Friday 20th January at 6.30pm where rumours of Celebrities, Cast members from Eastenders, CBBC starlets and a load of influential movers and shakers of South Wales are expected to attend this special Gala performance to celebrate the run of Dick Whittington.

We are in Port Talbot until 22nd January and would love to see you there! Some tickets are still available here or by calling 01639 763214