Each year thousands of theatre fanatics queue up to see the next celebrity tread the boards or eagerly await the announcement of the latest Pantomime title at their local theatre. School children burst with excitement when their teacher’s announce that their school trip will be one to the local Pantomime, and families plan their perfect Christmas finished off with a Panto treat! No matter who you are or what your occupation is, we all have that inner child which jumps for joy the thought of a Pantomime, but do you really know what goes on behind the scenes? How big of a team it takes to perform each production? Or maybe even how long it takes to produce a Pantomime? The truth is we usually giggle our way through a Pantomime blissfully unaware of the months of preparation, choreographing, casting, rehearsing and of course script writing that goes into creating the performance in front of you. So it was up to Jermin Productions to spill the beans… the magic beans of course! 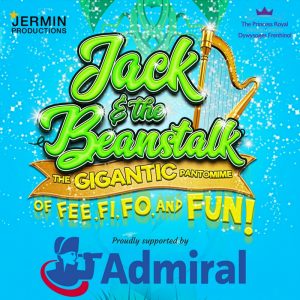 Jermin Productions, a Swansea based theatrical production company, are currently entering their fifth Pantomime season with their sights set HIGHER than ever before. This year the family run Pantomime company are producing a production of Jack and the Beanstalk which is set to visit FOUR theatre venues across South Wales including The Princess Royal Theatre in Port Talbot, The Lyric Theatre in Carmarthen, The Ffwrnes Theatre in Llanelli and Theatr Brycheiniog in Brecon. Brother and Sister, Mark and Nia Jermin shared a little wisdom and sprinkled a little Pantomime magic at a creative, interactive script writing workshop with a team of very enthusiastic Admiral employees. After supporting their first ever Jermin Productions Pantomimes last year, Admiral are back on board as a headline Sponsor this Christmas.

The Jermin Productions team arrived at the Admiral Offices in SA1 armed with Pantomime scripts, costumes and a big bag of novelty props. The day began with the group sharing their experiences of Pantomime and it become very clear that the love for Panto in South Wales was very much still alive. Jokes were shared, memories relived and we even had employees recreating some of their favourite scenes. The session was one of the most productive and imaginative script writing workshops Jermin Productions had hosted, it allowed staff to write their own Pantomime puns, rewrite lyrics to this year’s song choices and also have input into the storyline and featured characters. The Admiral team wrote some brilliant dialogue and brainstormed some innovative ideas which have made their way into the final edit of the script. 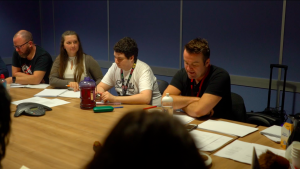 “We began looking at Character introductions and puns which soon stemmed to us rewriting lyrics to some of the most popular chart toppers at the moment and then on to changing characters names. It was brilliant to be able to bounce ideas around the room and start to see the staff invest in the script and the characters” 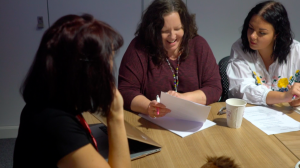 “We were blown away by the creativity of Admiral staff, not only did they brainstorm some fantastic ideas but a lot of their material is featured in our final draft of the Jack and the Beanstalk Script. It was lovely for us as creatives to be surrounded by people who were just as passionate and excited about our 2018 productions.” 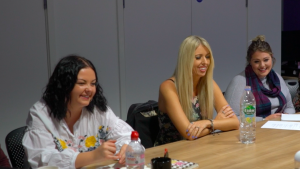 The script writing session proved highly beneficial to both the Admiral staff and the Jermin Productions team, from dames to golden egg laying geese the team managed to cover every single aspect of the script and also a few other areas of the Jermin Production Company. Mark and Nia Jermin explained the various specialist performances that they are hosting at some of their theatre venues this Christmas and New Year including signed, dementia friendly, school, adult only and relaxed performances. They also explained how the team are producing a bilingual Pantomime for the very first time and the challenges that come with this. The workshop not only developed creative writing skills and team work but allowed the employees to view the aspects of the company and production that aren’t always seen or appreciated.

“This was a fantastic experience for us as we were able to show how theatre can bring people together and ignite a passion in anyone. It’s a fun and effective way of encouraging creativity in a group and a refreshing atmosphere for the staff to be working in. It allows them to work as a team on the task in hand and then return to their workspace with a refreshing, new perspective on things.”

“We are excited to welcome Admiral employees to this year’s Production as they will feel a stronger connection to the production knowing how much work goes into it. Of course they will also see their jokes, lyrics and material being performed on stage and getting a laugh from the audience which is a priceless feeling.” 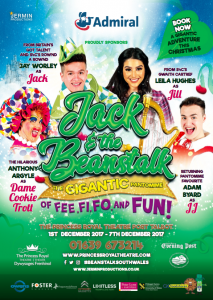 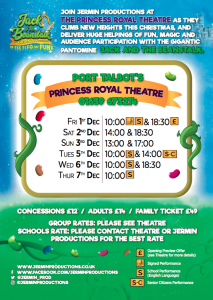 Jack and the Beanstalk open at The Princess Royal Theatre in Port Talbot on 1st December 2017 before moving on to Carmarthen, Llanelli and Brecon right through to 6th January 2018. Tickets are now available at all Theatre Box Offices for this GIGANTIC production featuring stars from stage and screen. Join returning characters JJ and Dame Cookie along with our newest member of the cast, Luna theTap Dancing Cow at this truly magical production.