OH YES HE DOES!! NIGEL OWENS SWAPS THE RUGBY PITCH FOR THE STAGE THIS PANTOMIME SEASON!

International Rugby Union referee NIGEL OWENS has swapped his Rugby tactics to tackle a different Project ahead of this Festive Season. He follows in the footsteps of the late Robin Williams to voice the GENIE in a local Pantomime production of ALADDIN which will appear in Port Talbot, Carmarthen and Llanelli this December!

Nigel, who is a world recordholder for being the current referee for the most test matches and refereeing all over the world as part of the Welsh Rugby Union spent some time recording his role this week in a Swansea studio.

Nigel is a fantastic sport and is no stranger to Pantomime. In 2016, he teamed up with Jermin Productions in a production of Dick Whittington as he took on the role of Britain’s Prime Minister announcing Swansea was infested by Pantomime Rats!! He was fantastic on camera and his role was well received by the public! 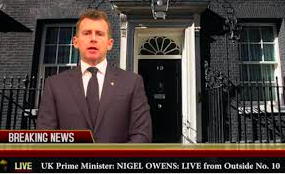 “Time for a new challenge, looking forward to starting my new job with immediate effect.”

Owens has shown great support for Rugby Star Gareth Thomas over his recent homophobic attack and now appears to be following Gareth’s footsteps into the limelight on stage in Pantomime!

Jermin Productions are delighted to have his support “Nigel is so excellent at supporting local projects, in 2016 his role as Prime Minister went down so well with our audiences, we’ve been dying to get him to return to Pantomime!” said director Mark Jermin.

“The Genie is such an iconic role, and we’ve taken inspiration from the Disney classic filmin giving our Genie a well know and well loved voice in the form of NIgenie”