The Rainbow countdown is on for Swansea, as a Strictly sensational Pride Event comes to town full of Samba, Sequins and Sass!

It is 3 months until PRIDE splashes across the city in its colourful and vibrant style and to commemorate the official countdown, the Swansea Pride events team and Old Havana Swansea are hosting a pre-Pride launch party on Wednesday 6th February

May the Fourth be with you for this year’s spectacular Swansea Pride which will be hosted on Saturday 4th May 2019! This day promises to be a real highlight of the South Wales calendar as the friendliest South Wales city celebrates its 50th anniversary as a city. 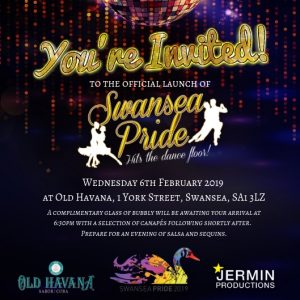 Love to dance? Well this is the pride for you as the prestigious Brangwyn Hall hosts Wales’ first LGBTQ+ inclusive dance competition with some of the industries’ biggest names judging the event which we launch at The Old Havana in Swansea this Wednesday evening. 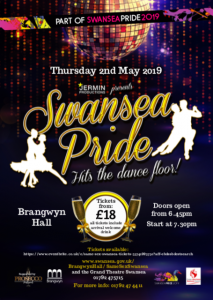 Hosted by actress and former Strictly contestant Charlie Brooks, Judges on the day will include Eastenders star Michelle Collins there to scrutinize your Samba, Leading talent agent Leigh-Ann Regan will challenge your cha-cha and Swansea’s very own funny man Chris Norman will be on hand for some guaranteed belly laughs!

But that’s not all, Jermin Productions have also worked hard to secure and fly over a huge star from Ru Paul’s Drag Race in America, and as part of Swansea Pride this year, on Friday May 3rd, Christine Aguilera impersonator and Drag Queen Farrah Moan will fly to Wales ready to entertain at Fiction Swansea. 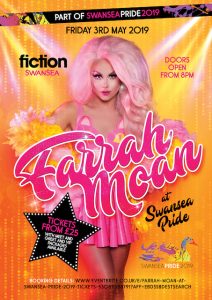 We are also proud to present a Youth Showcase “Up Next With Pride” on Wednesday 1st May and look forward to ‘Pride & Faith’,  An interfaith LGBT+ service of celebration as part of Swansea Pride 2019 held by Swansea Unitarian Church (the first place in Swansea to register for same sex marriage ceremonies) on Sunday 5th May 2019, 2pm Join Rev Wyn Thomas  for a special service of celebration . 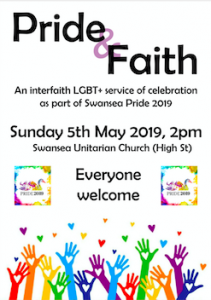 This WEDNESDAY 6th February, will see us (high!) kick off one of the additional Pride celebrations “Swansea Pride Hits the Dance Floor.”

What a Quick-Step in the Right Direction for Swansea: Hosting the UK’s First Ballroom Dance Event in celebration of Pride. The sight of skimpy leotards, colourful frocks and glittery hair is one that we, as a nation, have become accustomed to on Strictly Come Dancing, as the popular Saturday night television staple has cha-cha’d its way into millions of living rooms across the country. One sight, however, that we have not yet become accustomed to seeing on the television show and in the world of ballroom, is same-gender dancing, the involvement of trans contestants, men dancing in heels and Drag Queen couples hitting the dance floor… ALL of which WILL be seen in Swansea this year in spectacular style!

In May 2019, the city of Swansea will be making attempts to involve a much more diverse competition and celebrate the LGBT+ Communities in the dance world by pioneering the first Pride ballroom dance event of its kind. “Swansea Pride Hits the Dancefloor” will welcome in the celebrations of LGBT+ festival – Swansea Pride on Thursday May 2nd 2019 at the Brangwyn Hall. Swansea Pride commences on May the 4th and will be one of the first  major city Prides of the season laying foundations for successive, infamous Pride events in London, Brighton and Manchester.

‘Swansea Pride Hits the Dancefloor,’ will feature real gay and lesbian couples, friendship couples and transgender contestants from the South Wales area. Each pair will be introduced to local dance teachers and instructors and undergo a gruelling 10 weeks of training to get those fingers flexing and toes pointing. Amongst those aiming to achieve a “sizzling SEVEN! Or ‘perfect ten’ will be some of Swansea’s well-known, elite representing a variety of working backgrounds.

Like the famous dance inspired show, the Swansea contestants are all amateurs who have never before attempted a foxtrot and the only rumba they know is upstairs in Old Havana’s bar and restaurant! They each are marvellous sports in signing up to perform to a live audience and to be judged by celebrity guest judges and dance experts!

Popular and celebrated Swansea couples of the same gender will be partnered up and demonstrate their best ballroom moves through the American Smooth, the Tango or Jive and cha cha cha their way onto the dance floor where they will be welcomed by the hosts. Popular Swansea funny man CHRIS NORMAN and CHARLIE BROOKS (Janine from BBC’s EastEnders, who has actually appeared on a previous Strictly Come Dancing Christmas Special so will be able to identify with this year’s Swansea contestants) will host this evening of Ballroom with a Pride twist!

Pride Swansea are officially launching this Event on WEDNESDAY 6TH FEBRUARY at OLD HAVANA, York Street, Swansea where we will be revealing our dance couples and expert choreographers on the evening for the first time! This will give then give each couple just under 3 MONTHS to get your routines glitter ball ready. Vlogs will be available online so that the public can follow each contestant’s progress every glitter step of the way!

Mark Jermin of Jermin Productions is aiming to do just that and promises that ‘Swansea Pride Hits the Dance floor” will get the celebrations off to a swinging start: ‘we are delighted to be producing events and developing ideas for Swansea Pride in May 2019. This will be a brilliant and stylish start to the celebrations and will add a touch of glamour to the week.’

Robyn Lee from Old Havana adds “We can’t wait to welcome the contestants at the Event’s launch party… We’ve got a playlist of dance floor classics to see how much natural rhythm they’ve got and can’t wait to see how their Choreographers out them through their paces! Our staff will be waiting with Cuban themed cocktails should any of them be feeling stressed or panicked by the possible ‘curse of Strictly!’

As in the world of ballroom dance, the night will include scathing critiques including celebrity guest judges, heart-breaking pitfalls and possibly the discovery of the next Fred Astaire and Ginger Rogers ! The couples who each will be designated a Swansea choreographer and dancer expert will perform their routine live on the night and audiences will then vote to crown the winner of Pride Swansea Hits the Dancefloor 2019!

Other entertainment will fill the evening as the votes are counted and the winner of the Same Sex Swansea glitter ball trophy is revealed!

Guests are then welcome to join the contestants for a boogie on the dance floor until closing. This will be a sizzling spectacular evening to really (high) kick start Swansea Pride 2019 , it promises to highly entertaining and in the words of Craig Revel Horwood, it will be “fab-u-lous darling!”

Tickets are available to all genders, sexualities, ages and those who don’t know their flamenco from their fandango. Ticket prices range from £18 to £25 and all include a free glass of Prosecco with compliments from the event sponsors – Prosecco Festival. Doors at the Brangwyn Hall open at 6:45pm with the dancing starting, in the words of Len Goodman, at ‘SEV-EN’ thirty.

The event, along with Swansea Pride’s new revamp will raise awareness for issues within the LGBT community but most of all it will be a celebration of love for people of all genders and sexualities and will encourage people to ‘Keeeeeeeep Dancing.’