Wowzers, what amazing feedback for #CinderellaSouthWales…. our most ambitious Pantomime to date! We are delighted to hear that audiences have been enjoying Cinderella as much as out team have loved working on it!! 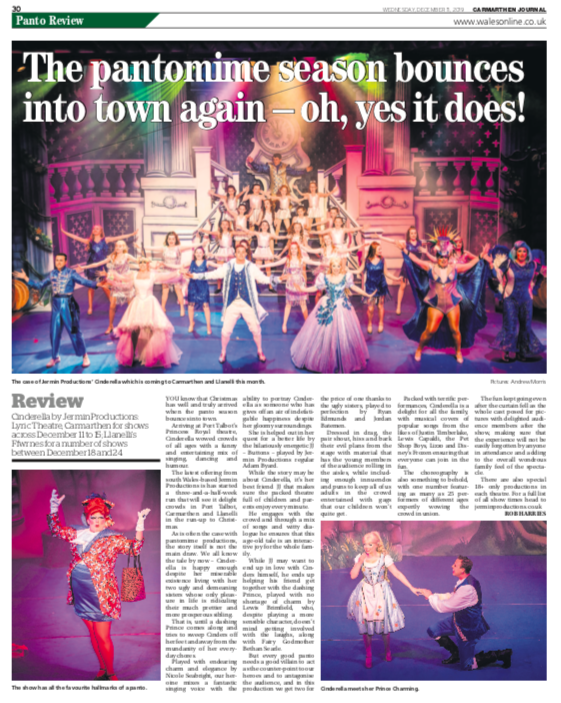 Its 12 out of 12 for one South Wales midnight magic Pantomime, who raised the Curtain on Cinderella… the most traditional Pantomime of all last weekend. This Pantomime which will move across 3 South Wales Theatre Venues this December is bursting with glamour, confidence and glorious production values.

In short, this version of Cinderella is a triumph, mixing beautiful tradition with hilarious modernisms and all with true Christmas spirit, heaps of fun and acts of kindness at its heart…I defy anyone to leave this show without a warm festive glow.

The magic gallops on to stage with rainbow charm right from the moment Bethan Searle in the role of the Fairy Unicorn, a new spin on the traditional Fairy Godmother role rides on to stage with her Unicorn friends. Her performance is sprightly and her rendition of Unicorns Always (The Wannadies’ You and Me) is a highlight with all Unicorn lovers!

Taking the title role is Nicole Seabright who looks and sounds every part of the Disney Princess. Her dress defying transformation moment when she turns into the Princess Crystal leaves audiences cheering for more throughout the interval. She is accompanied by the handsome Lewis Brimfield in the role of Prince Charming. Usually this can be a bit of bland role playing the straight man in this traditional tale, However this Prince gets down and dirty with some intricate whacking choreography as he and Buttons take on a spectacular Spice Girls medley to open Act 2. The romantic duo of this Cinderella and Prince Charming are a panto perfect pairing singing Lewis Capaldi’s “Someone You loved” so beautifully.

The Pop tastic tunes are expertly played by Musical Director David Westcott. He is joined by Bob Thomas on drums, who has a busy show with all the classic drum joke hits and despite their small team, the Musical numbers sound West End worthy accompanied by some of South Wales’ finest young performers. A special mention to these dancers aged 7 to 18 who delighted audiences with their performances… From Trolls to Great Britain Voters to Unicorns, they all shone on the brilliantly lit stage with lighting and effects led by the talented Emily Darlington.

Now, no Panto is without gags and gimmicks and this year’s Cinderella had a flurry load more than the new Frozen 2 film! The audiences of the Princess Royal Theatre lapped up the wittiest script where jokes exploded on to stage with firm Pantomime favourite Adam Byard returning to the role of JJ Buttons. Byard’s impeccable comedy timing, infectious energy and knack of delivering with ease the best one liners makes him a stand out in this Production.

Unwrapping  double the trouble and double the hilarity are one of the best double dynamite acts in Panto history! Storming on to stage were Jordan Bateman as B’ree “That’s B’ree Exit don’t you know” and Ryan Edmunds’ T’ree “that is short for T-eresa Easy May!” These Ugly sisters had the audience belly laughing having been booted out of Number 10, and after making Boris’ life a misery, they’ve come to cast their curse on Cinderella! With political Britain at the heart of their first number, their version of “The Best (Go West) Sisters in the Land” had the audiences wowed… Not only are these 2 Pantomime’s funniest ugly sisters, they each can bust out a move even with the most outrageous Costumes.

Ryan Edmunds’ Aspagrag-ass is worth the ticket price alone!

All credit to the Jermin Productions team. The theatrical brother and sister duo Mark and Nia Jermin have created something special at every level this year. A stunning design and superb casting of an ultra-talented company makes this a clean sweep for Cinderella South Wales”

No expense has been spared on this lavish production, the stunning scenery moves from Hard Up Hall, to the creepy Welsh woodland to Prince Charming’s luxurious Ball with ease thanks to the work of the excellent Stage crew led by Mark Jones. I guarantee the technicolour design accompanied by the outstanding performance will delight audiences young and old in the coming weeks as it visits  Port Talbot, Carmarthen and Llanelli Theatres

What makes this version of Cinderella stand out from others, is the Company comradery we witness on stage. The equal billing and equal use of the extremely talented triple threat cast was a real delight, every performer had stand out moments and executed the impressive choreography, quick fire slapstick routines whilst driving the story along brilliantly.

Refreshing audience participation was perfectly led by the Cast and there are jokes and moments for every age group to get involved with this riot of a panto! B’ree and T’ree of course take things even further with “Dylan – The new Leader of our Parliament and the man in the front row” who was picked on during last night’s performance and whom should be congratulated for being an excellent sport!

The slipper fits for Cinderella and so does this Pantomime… a stunning production from Jermin Productions. Don’t miss this highly entertaining Panto that is the perfect festive family feast for the senses! Limited Tickets are still available, but we promise you won’t be disappointed with this ball of a show!