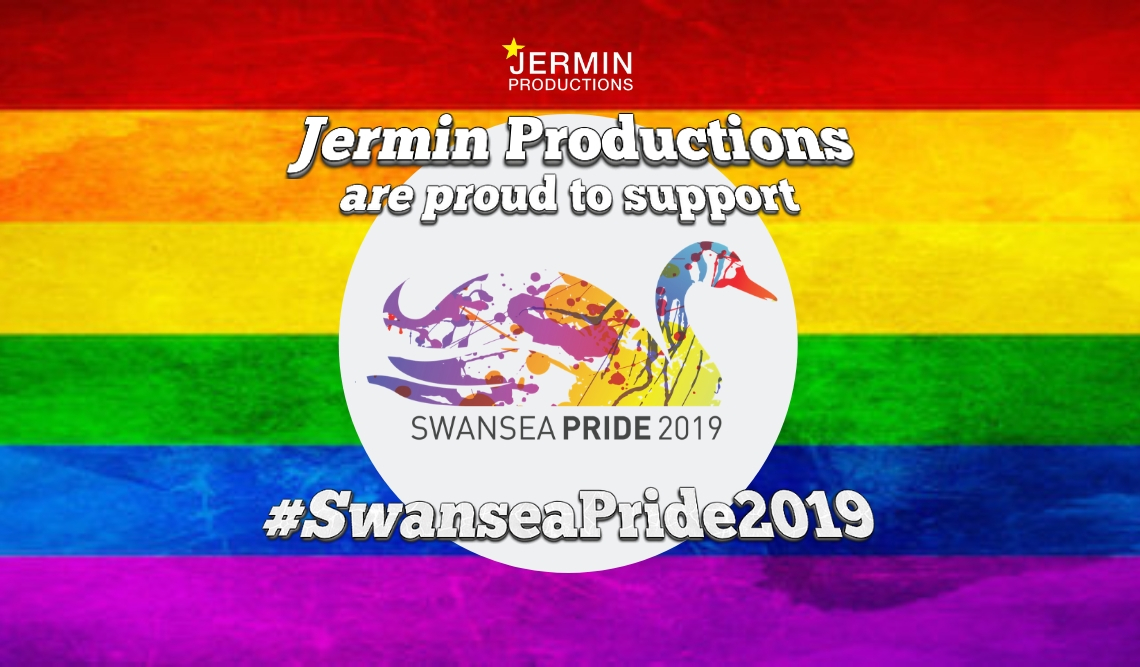 Jermin Productions were delighted to assist the production of Swansea Pride for this year and help conduct a Swansea Pride themed week, which ran from Tuesday 30th April to Sunday 5th May 2019. Saturday 4th May was the main day and saw Swansea City centre as you’ve never seen it before, a blaze of rainbow colour all in support for the LGBT+ Community.

Swansea Pride was created with the aim of raising awareness and showing our continued support to our LGBTQ+ communities here in the city, with a huge number of individuals, groups, business, companies, families and organisations being invited to publicly support and get involved with the celebrations. Our intention was for this years Swansea Pride to be the MOST inclusive Pride the city has seen had ever seen. Swansea Pride 2019 welcomed people from ALL walks of life urged ANYONE to pick up a rainbow flag and join in the festivities.

Jermin Productions were proud to work alongside the Swansea Pride Committee and were overwhelmed with the support shown by the people of Swansea for Swansea Pride 2019 as well as the support all across the UK for this new event. 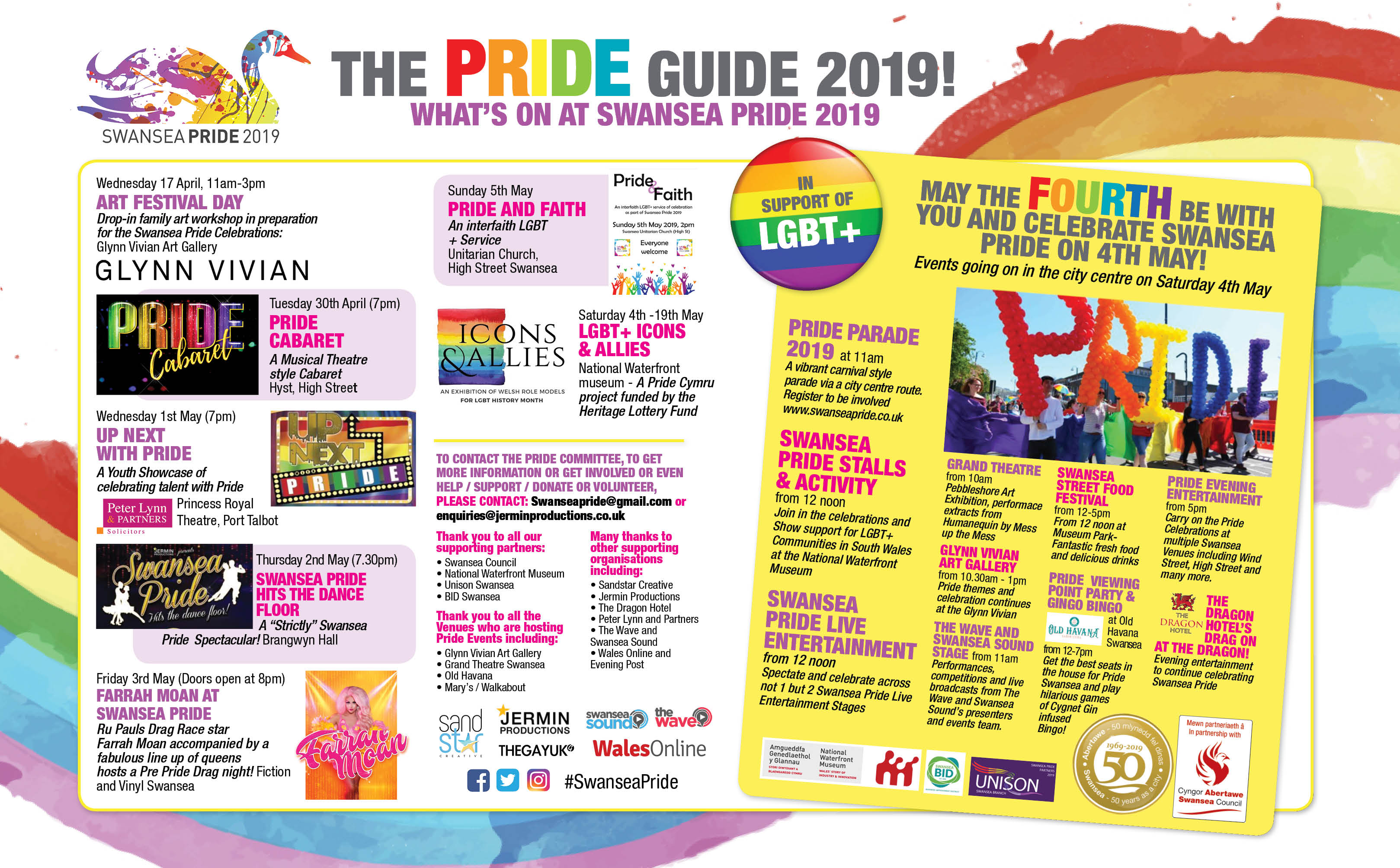 What events took place in Pride Week and who was involved?

One of the many aims for Swansea Pride was to educate and involve young people. We wanted to encourage young people to celebrate themselves and embrace eachothers identities with no judgements. The first event that took place for Swansea Pride 2019 was a pop-up Musical Theatre inspired Cabaret evening featuring performers from The Mark Jermin Stage School’s Elite Musical Theatre Students; The Jerminators. 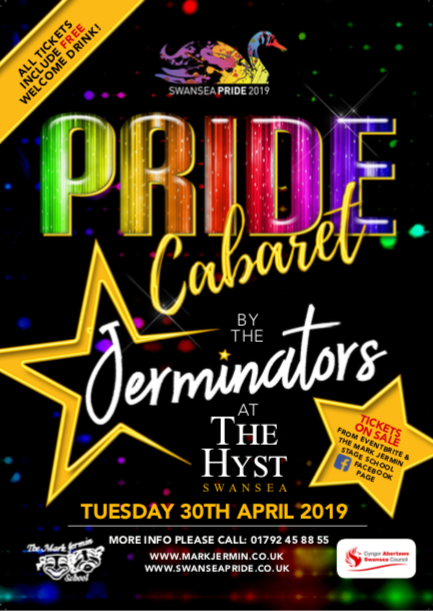 This dazzling cabaret kicked Swansea Pride off to an amazing start, with a sold out performance and glowing reviews! The cabaret night saw the performers take to the stage and perform a variety of songs from Musicals which are inspired by the LGBTQ+ community, to songs which encompassed what Pride means to them personally. We had a surprise guest on the evening, the wonderful Ruby Slippers Drag Artist stopped by to give the audience a taste of what was to come throughout the week!

This show stopping evening was held at Swansea’s very own Cabaret venue, The Hyst which housed this intimate event perfectly. We would like to say a huge Thank You to The Hyst and all the staff for creating a venue which inspires young performers and for supporting Swansea Pride 2019!

Wednesday 1st May 2019 saw Jermin Productions produce … Up Next with Pride! 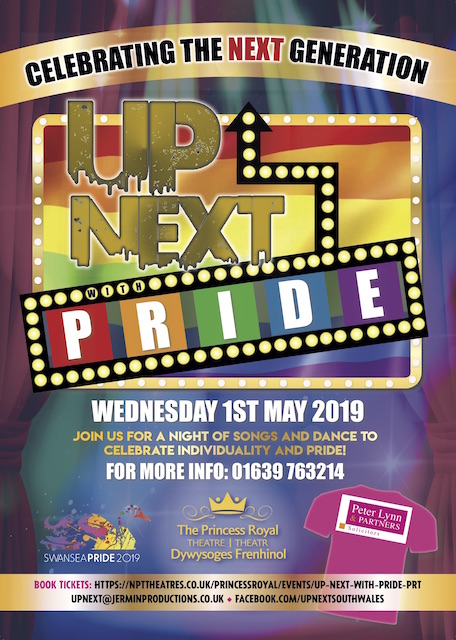 Continuing with our inclusion of young people in Swansea Pride 2019, Wednesday 1st May saw hundreds of young performers from across South Wales take to the stage at the Princess Royal Theatre, Port Talbot. Up Next with Pride featured choirs, dance schools, soloists and gymnasts who stepped out on stage to celebrate their uniqueness, passion and individuality. Each performer left their worries in the wings and burst on to stage in a flurry of rainbow colours and sequins. In this explosion of courage, confidence and talent our performers certainly made South Wales PROUD!

With the next generation having their time on stage, it was time to put the talent of some adults to the test in Swansea Pride Hits the Dance Floor! 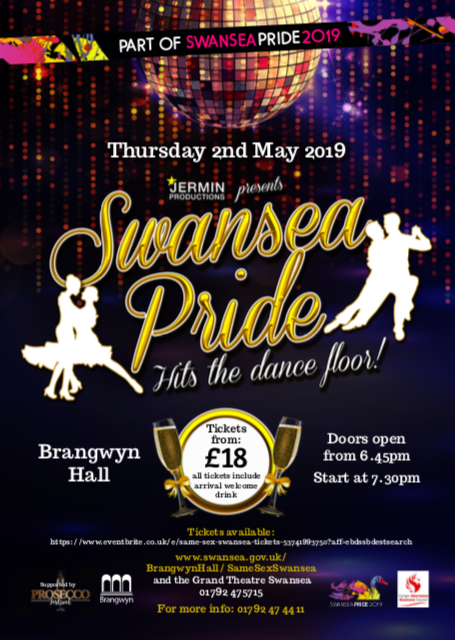 The first event of its kind to land in South Wales was ‘Swansea Pride Hits the Dance Floor’ which saw ten LGBTQ+ supporting couples step out into the spotlight of the Brangwyn Hall for a Strictly Come Dancing evening with a fabulous PRIDE inspired flair!

This fabulous evening was the first ever of its kind for Swansea and the support was unbelievable! Our 10 nervous couples who went from dad dancers to dancefloor divas in just over ten weeks, our 10 choreographers who created some of the most showstopping numbers ever to be seen and our live studio audience catapulted this event into an astonishing success. The audience were welcomed to the event with a fantastic rainbow prosecco reception which included Pride themed goodiebags from DJW Wealth. We would like to say the biggest Thank You to Dawsons for their support as well as JR Events, The Brangwyn Hall Staff and Swansea City Council. 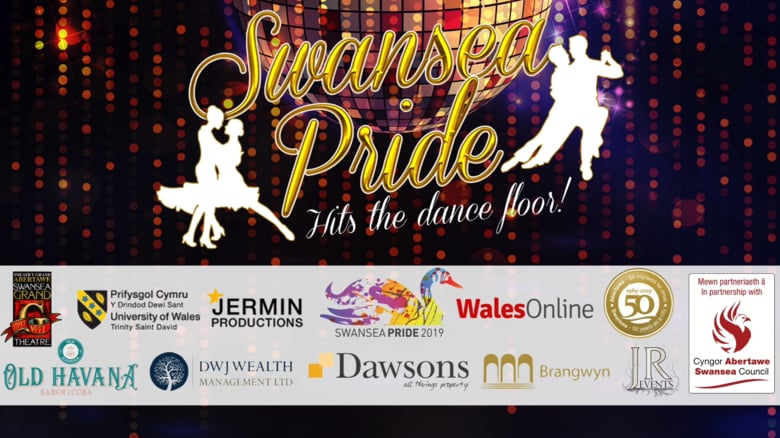 The starstudded panel took centre stage at the Brangwyn Hall, this Top Table was made up of Soap Royalty, Michelle Collins, Agent to the Stars, Leigh-Ann Regan, Dance tutor extraordinaire, Terry Michaels and Ex-Ballroom Champion, Lisa Pike Cohan. The event was hosted by none other than Swansea’s very own answer to the Kardashians, Chris Norman. Keeping Chris in line was a force to be reckoned with, the reigning Queen of Soap, Charlie Brookes (Janine Butcher, Eastenders). 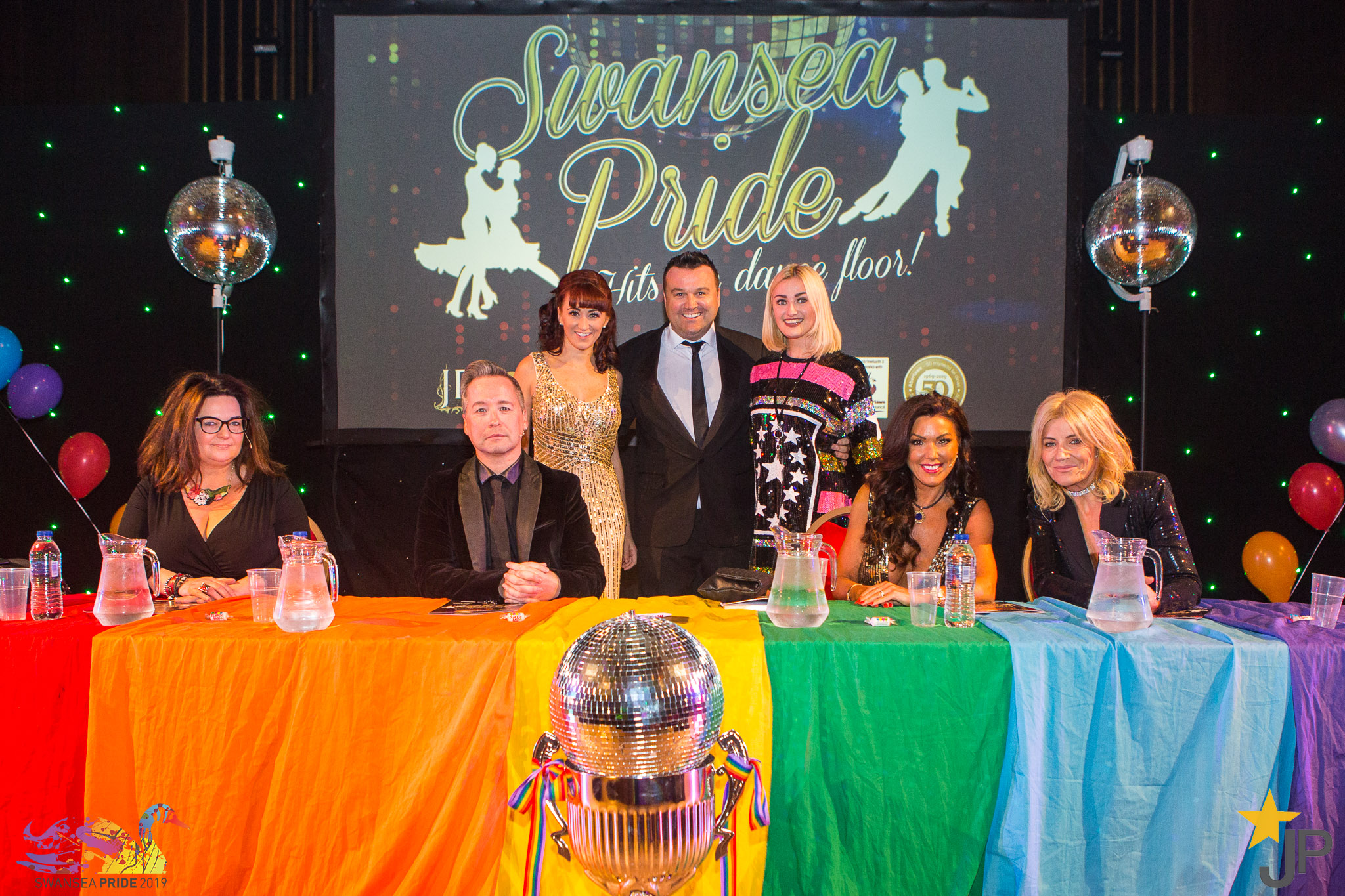 The glamour did not stop there, Swansea Pride was delighted to welcome the arrival of Ru Paul’s Drag Race royalty FARRAH MOAN as the All Star landed in Swansea to perform her spectacular Drag Show at the packed out Fiction and Vinyl! 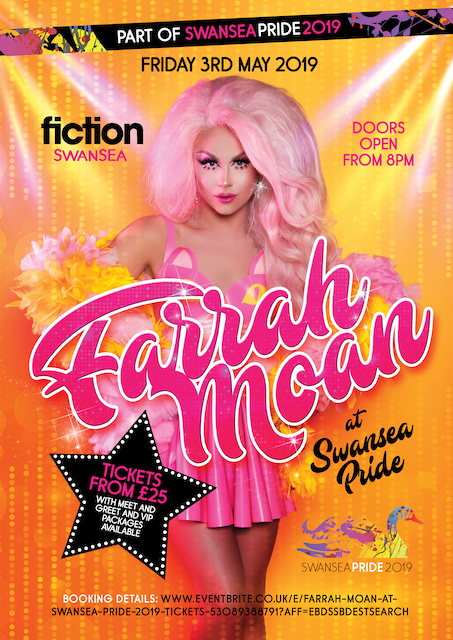 Another FIRST for Swansea, Farrah Moan became the first EVER Ru Pauls Drag Race queen to perform in our Sea Side City.

The pink carpet was rolled out down Little Wind Street as Drag Race phenomenon Farrah Moan served Pride looks galore to a jam-packed audience. This event saw fans of Ru Pauls Drag Race come together to supporters of the LGBTQ+ community and rub shoulders with a star studded guest list at this glamourous night to remember. This evening welcomed established Drag Queens from across South Wales including Amber Dextrous, Ruby Slippers and Kara Von Site take to the stage to warm up the crowds and open the doors to the world of Drag here in Swansea. 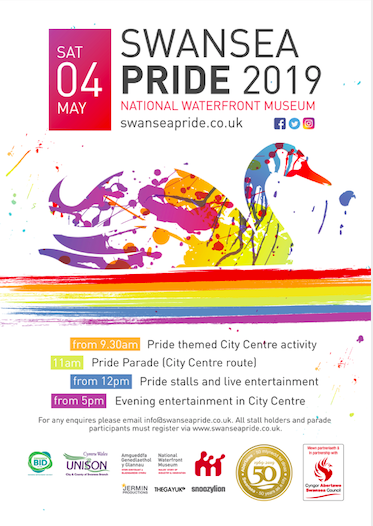 The whole of Swansea City was engulfed in rainbow flags as the Main Day of Swansea Pride 2019 got well underway. The first stop of the day was the vibrant, carnival style parade which flooded through the cobbled city streets. Thousands of you strutted through the city in support of Swansea Pride 2019. The parade saw floats from local businesses, including Co-op’s now infamous Rainbow Hearse, drum up the party atmosphere as they navigated their way down the parade route. Joined by a sea of supporters from LGBTQ+ Groups and communities, along with big businesses who walked, danced and zumba’d the whole route! The VIP Open Topped Bus, kindly supplied by Swansea Bus Museum, led the parade from start to finish and was jam-packed with the who’s who of influential people in the South Wales LGBTQ+ community.

Back at the Museum Green the crowds joined in the festivities! The two stages situated in and around The Swansea Waterfront Museum saw reams of performers entertain the huge crowds and keep the celebrations going. We saw performances from a never ending list of local Drag Talent, Soap Stars such as Amanda Henderson, Youtube sensation and home grown talent Reuben De Maid, young performers from dance and stage schools across the city, fabulous Tribute acts, All Together Now Winner Shelley Ann and a variety of Guest Speakers. Filling the Waterfront Museum were LGBTQ+ pop-up stalls from organisations all across South Wales, which merged with Swansea’s Street Food Festival .

If you missed any of this year’s celebrations, you can view footage here:

Coverage of Swansea Pride Parade 2019 can be viewed here. 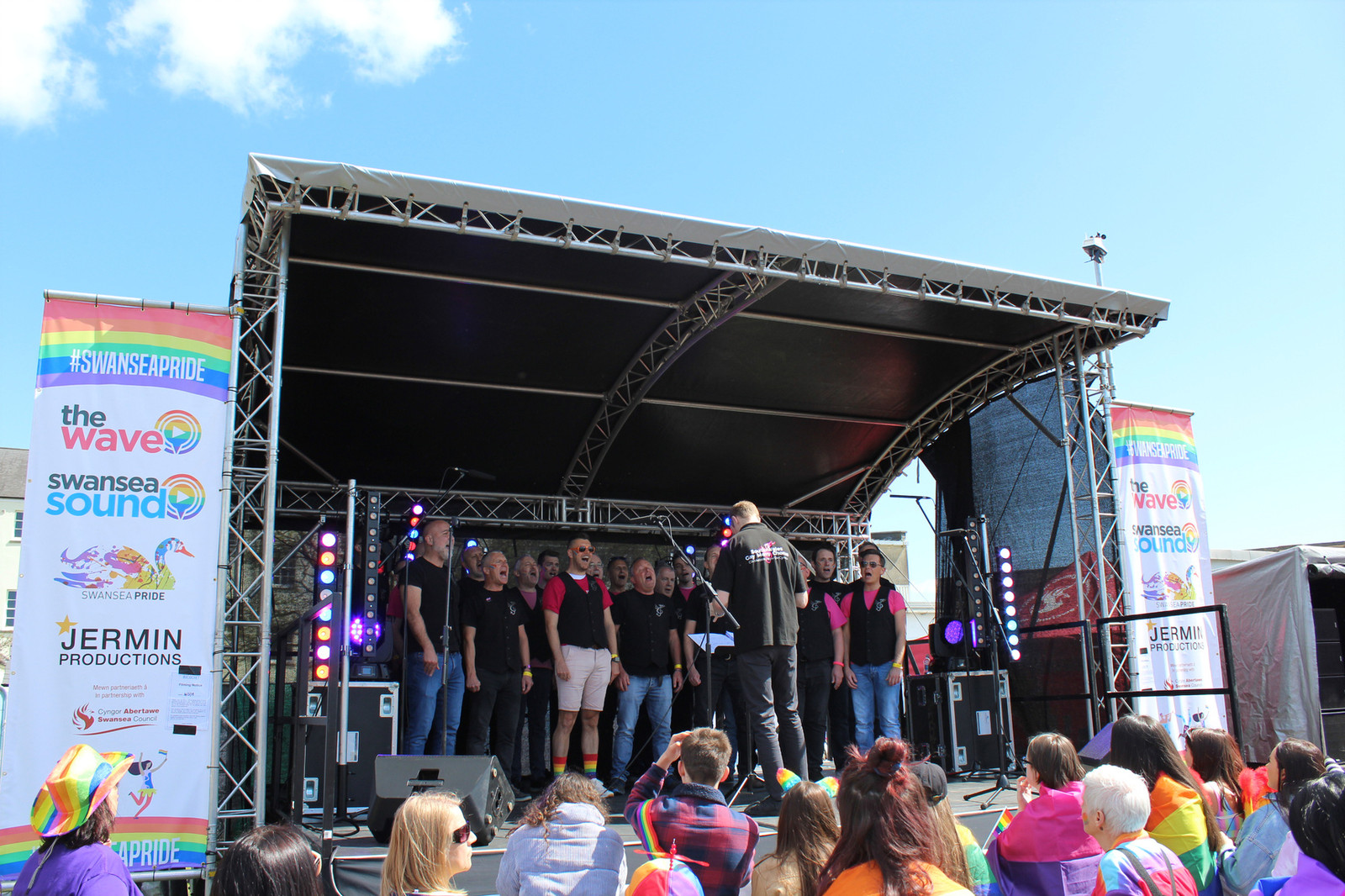 A huge THANK YOU to every single person who showed their support for this mammoth event, and helped to transform our vibrant and diverse City into a welcoming, loving and inclusive place for all members of the LGBTQ+ community here in South Wales. 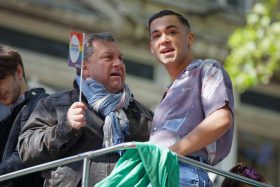 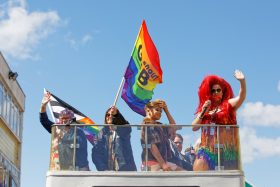 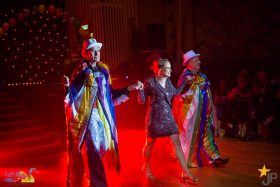 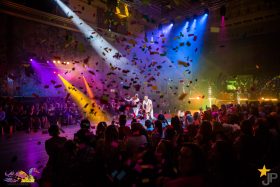 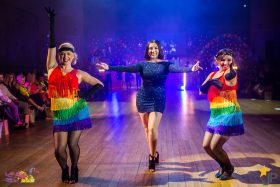 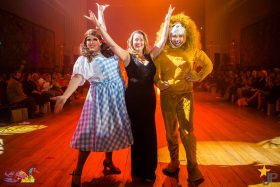 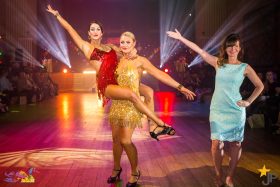 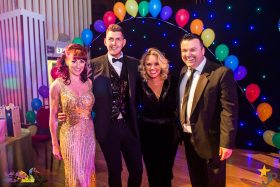 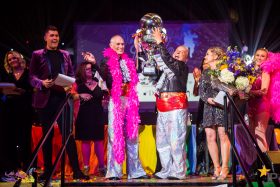 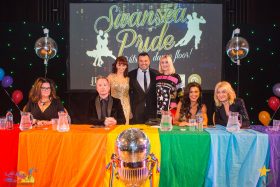 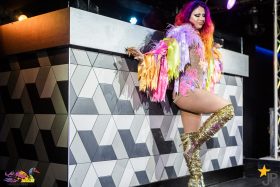 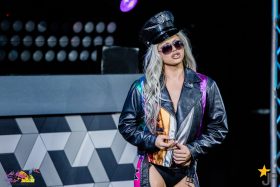 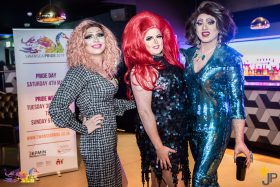 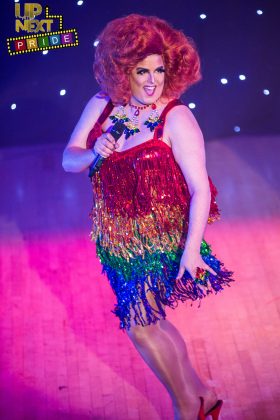 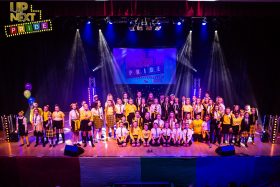 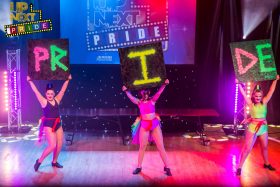 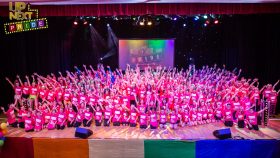